We’ll keep you posted on what’s happening in the Great Southern universe and beyond. Community events, policy updates, fraud prevention and other tips… you name it.
September 15, 2017

Donations will aid emergency response and recovery efforts following the devastation of both Hurricane Harvey and Hurricane Irma.

Hurricane Irma
American Red Cross is responding to the devastation all across Florida and the Southeast, part of a huge team of partners working side by side to provide safe refuge and support to people forced from their homes by this monstrous storm. Today, over 2,600 Red Cross disaster workers are on the ground, providing shelter, food and relief for tens of thousands of survivors with nowhere else to turn. To date, evacuation centers have provided more than 485,000 overnight stays to people needing a safe place to go. The American Red Cross is also deploying truckloads of relief supplies and has activated nearly 100 emergency response vehicles to support this response effort.

Hurricane Harvey
The Red Cross operation in Texas and Louisiana remains focused on sheltering and feeding affected residents, as well as providing emergency relief supplies, health and mental health services and functional needs assistance. The Red Cross also continues to work on identifying any unmet needs, both at the community and individual levels. As of September 6, 2017, the American Red Cross has raised $211 million in donations and pledges to help people affected by Hurricane Harvey, with more still coming in. We estimate that disaster relief and recovery efforts, in response to the largest flooding disaster in U.S. history, could cost hundreds of millions of dollars more and last many months and even years.

Great Southern Bank operates 108 offices across nine states in the Midwest; Minnesota, Missouri, Iowa, Arkansas, Kansas, Nebraska, Texas, Oklahoma and Illinois. With $4.6 billion in total assets and a mission to build winning relationships with its customers, associates, shareholders and communities, Great Southern is headquartered in Springfield, Mo. Great Southern Bancorp, Inc. is a public company and its common stock (ticker: GSBC) is listed on the NASDAQ Global Select stock exchange. 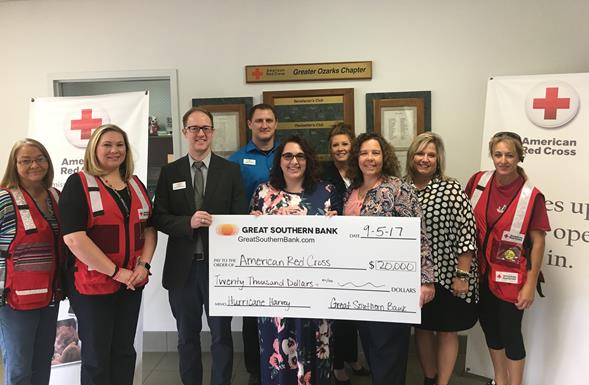 “On behalf of the Great Southern Bank family, our thoughts are with everyone whose lives have been devastated by Hurricane Harvey,” said Joe Turner, President and CEO of Great Southern Bank. “If you are able to offer your support, we encourage it as it greatly helps families and their communities recover in the challenging weeks and months ahead.”

In the September 2, 2016, FDIC announcement, FDIC Chairman Martin Gruenberg said, "We are fortunate to have such talented and dedicated community bank leaders join our Advisory Committee, which has been a valuable resource for the FDIC over the last few years. The Advisory Committee has proven to be a key source of information and input for the FDIC on many significant issues facing community banks."

The Advisory Committee on Community Banking, consisting of 13 members, discusses and provides input to the FDIC on a wide variety of topics, including current examination policies and procedures, credit and lending practices, deposit insurance assessments, insurance coverage and regulatory compliance. For more information, please visit the Advisory Committee on Community Banking webpage at http://www.fdic.gov/communitybanking/.

﻿ This donation will provide resources for programs and services offered at their Cultural, Educational and Business Center located on Page Boulevard.

Great Southern Bank sees the merit and importance of community investment initiatives like this and encourages St. Louis area businesses and individuals to contact Better Family Life to learn more about YOP tax credit opportunities. “Great Southern Bank is proud to invest in Better Family Life and their mission of establishing social, cultural, artistic, youth, economic, housing and educational programs that help to promote positive and innovative changes within the metropolitan St. Louis area,” said Joe Turner, President and CEO of Great Southern Bank. “Better Family Life provides quality programs and resources that are greatly needed by residents of our community and we are very pleased to provide our support.”

About Better Family Life, Inc.
Established in 1983, Better Family Life, Inc. (BFL) is a 501c3 not-for-profit community development corporation that is dedicated to the prosperity and growth of the American family. BFL’s mission is to plan and establish social, cultural, artistic, youth, economic, housing, and educational, programs that help to promote positive and innovative life changing experiences. Much of BFL’s programming is geared toward people who are unemployed, underemployed, disadvantaged and skill-deficient. Better Family Life took residence in its new headquarters, The Better Family Life Cultural, Educational and Business Center world-class institution is located at 5415 Page Blvd., St. Louis, Missouri 63112. For more information about BFL, please visit: www.betterfamilylife.org .

About Great Southern Bank
With total assets of $4.1 billion, Great Southern Bank operates 114 offices in eight states, including eight full service retail banking centers in the St. Louis area. Great Southern Bank’s Community Matters Program serves as the foundation of the Company’s philosophy of how to strengthen its communities by leading, doing, giving and teaching. Learn more at www.GreatSouthernBank.com

Great Southern Bank, a wholly-owned subsidiary of Great Southern Bancorp, Inc. (NASDAQ:GSBC) announced today that it has entered into a purchase and assumption agreement to acquire 12 branches and related deposits and loans from Cincinnati-based Fifth Third Bank. The acquisition, currently representing approximately $261 million in deposits and $155 million in loans, is expected to be completed in the first quarter of 2016, pending regulatory approval. This acquisition will increase Great Southern’s St. Louis-area banking center total from eight to 20 offices. Based on the expected amount of loans to be acquired and deposits assumed, it is anticipated that beginning in 2016 this transaction will be accretive to earnings in the range of $0.07 to $0.09 per common share annually.

“Great Southern has served the St. Louis-area market with a physical presence since 2005. During the last 10 years, thanks to our excellent St. Louis team of associates, we have continuously attracted and developed customer relationships, making St. Louis our second largest market. This transaction will significantly strengthen our presence in this vibrant region,” said Great Southern President and CEO Joseph W. Turner. “We warmly welcome Fifth Third’s retail and small business customers and its strong team of associates to Great Southern and look forward to working with them to build even stronger relationships with area customers.”

Fifth Third Bank customers at the St. Louis-area branches should continue to bank as they always have until further notice. Important information about the acquisition will be mailed to customers in the coming days and weeks.

“We expect to transfer Fifth Third customer accounts to Great Southern in the first quarter of next year,” said Turner. “Our goal is to make this transition as smooth and timely as possible so that our newest customers can take advantage of our broad range of products and services, including our attractive online and mobile banking options.” 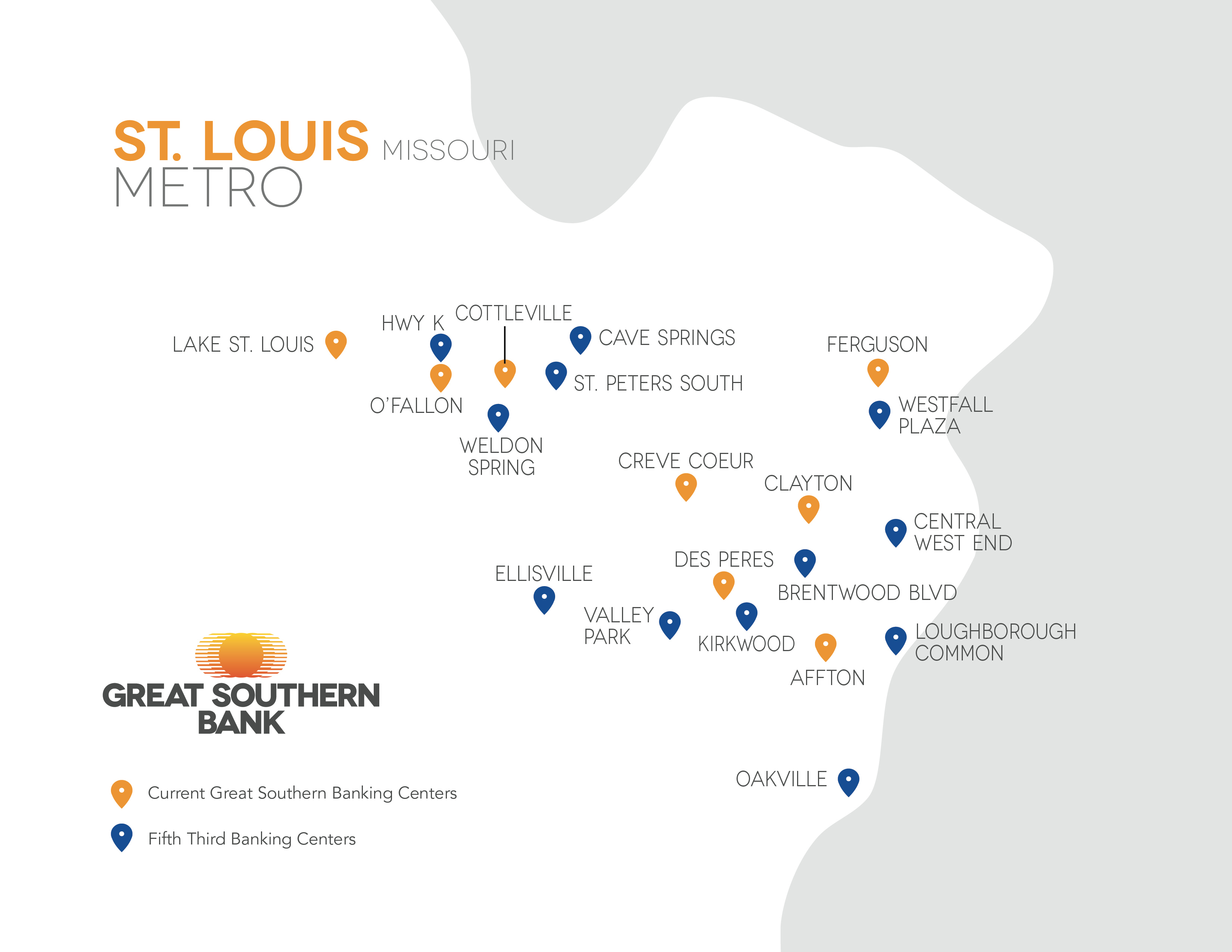 When used in documents filed or furnished by the Company with the Securities and Exchange Commission (the "SEC"),in this press release and the Company's other press releases or other public or stockholder communications, and in oral statements made with the approval of an authorized executive officer, the words or phrases "will likely result," "are expected to," "will continue," "is anticipated," "estimate," "project,""intends" or similar expressions are intended to identify"forward-looking statements" within the meaning of the Private Securities Litigation Reform Act of 1995. Such statements are subject to certain risks and uncertainties, including, among other things, (i)non-interest expense reductions from Great Southern’s banking center consolidations might be less than anticipated and the costs of the consolidation and impairment of the value of the affected premises might be greater than expected; (ii) the requisite regulatory approval of Great Southern’s pending acquisition of branches from Fifth Third Bank (the “Branch Acquisition”) might not be obtained within the anticipated time frame or at all; (iii) expected revenues, cost savings, earnings accretion, synergies and other benefits from the Branch Acquisition and the Company’s other merger and acquisition activities might not be realized within the anticipated time frames or at all, and costs or difficulties relating to integration matters, including but not limited to customer and employee retention, might be greater than expected; (iv) changes in economic conditions, either nationally or in the Company’s market areas; (v) fluctuations in interest rates; (vi) the risks of lending and investing activities, including changes in the level and direction of loan delinquencies and write-offs and changes in estimates of the adequacy of the allowance for loan losses; (vii) the possibility of other-than-temporary impairments of securities held in the Company’s securities portfolio; (viii)the Company’s ability to access cost-effective funding; (ix) fluctuations in real estate values and both residential and commercial real estate market conditions; (x) demand for loans and deposits in the Company’s market areas; (xi)legislative or regulatory changes that adversely affect the Company’s business,including, without limitation, the Dodd-Frank Wall Street Reform and Consumer Protection Act and its implementing regulations, and the overdraft protection regulations and customers’ responses thereto; (xii) monetary and fiscal policies of the Federal Reserve Board and the U.S. Government and other governmental initiatives affecting the financial services industry; (xiii)results of examinations of the Company and Great Southern by their regulators,including the possibility that the regulators may, among other things, require the Company to increase its allowance for loan losses or to write-down assets;(xiv) the uncertainties arising from the Company’s participation in the Small Business Lending Fund program, including uncertainties concerning the potential future redemption by us of the U.S. Treasury’s preferred stock investment under the program, including the timing of, regulatory approvals for, and conditions placed upon, any such redemption; (xv) costs and effects of litigation,including settlements and judgments; and (xvi) competition. The Company wishes to advise readers that the factors listed above and other risks described from time to time in documents filed or furnished by the Company with the SEC could affect the Company's financial performance and could cause the Company's actual results for future periods to differ materially from any opinions or statements expressed with respect to future periodsrent statements.

The Company does not undertake-and specifically declines any obligation- to publicly release the result of any revisions which may be made to any forward-looking statements to reflect events or circumstances after the date of such statements or to reflect the occurrence of anticipated or unanticipated events.

Want to know more about what we're doing in our communities? Check us out!

We post lots of cool stuff including pictures from community events, contests and more on our Facebook page!